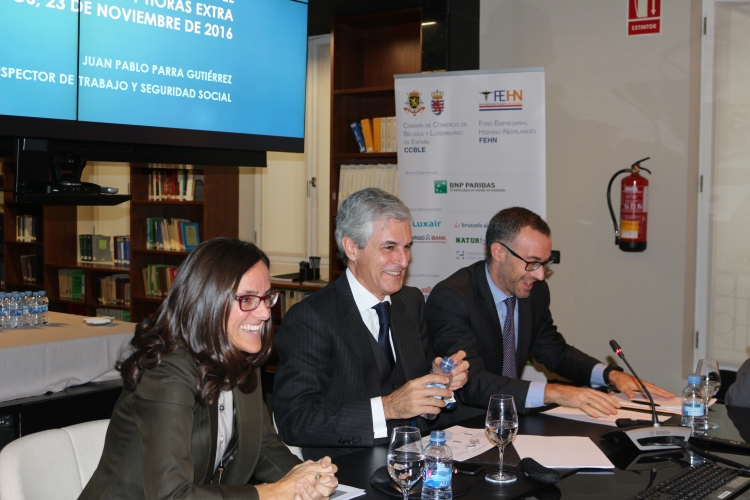 Ana Gómez: ’’It is compulsory to track daily working hours, either with or without overtime work’’

Spain
Last Wednesday ONTIER held the breakfast-conference called ”Working hours and overtime work: what is new?’’ together with the Belgian-Luxembourg Chamber of Commerce and the Spanish-Dutch Business Forum.

The conference was taught by Ana Gómez, our Partner at the Labour Law Department, together with Juan Pablo Parra, Inspector at the Ministry of Labour and Social Security. Several meaningful topics for both employers and employees were discussed, including working hours, overtime work, employer's right to watch and track, and also new released judgments regarding these topics.

Order 3/2016 rules that it's compulsory to track daily working hours, either with or without overtime work. It is also compulsory to track working hours in part-time contracts, as highlighted by Ana and Juan Pablo. Also, there's a wide variety of tracking systems that employers can apply. ''Employers are totally free to choose a system to monitor and track the performance of their employees. However, it's key to previously warn and inform them about the chosen system as well as about its purpose, remarking the tracking features'', stated our partner at the Labour Law Department.

Pablo Parra noted that labour inspections are thoroughly checked. ''We verify what's been observed during the visit. We check if there's a tracking system and if the limit of working hours has been surpassed. A breach report is filed in the event of surpassing the established working hours having an implemented tracking system. When we get out of the company we always know how they track working hours'', noted the inspector, and he reported that last year 2,773,780 overtime hours were paid every week, but 3,477,800 overtime hours ended up unpaid weekly in Spain.

More than 30 companies within different sectors attended the conference at the ONTIER Madrid office.