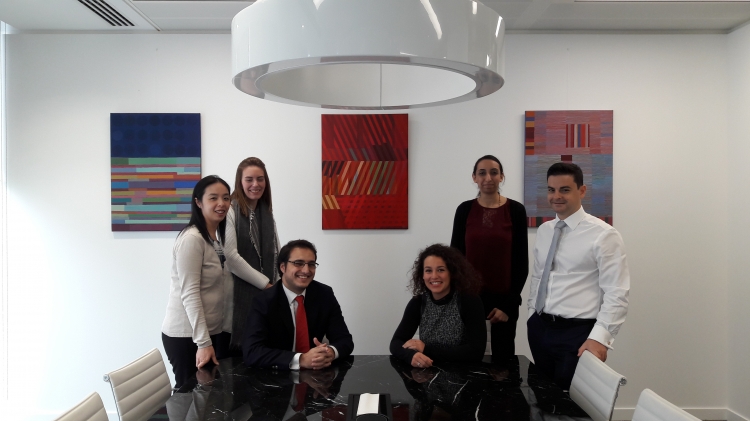 ONTIER UK supports starting artists through an exhibition in the Ludgate Hill office.

Art and football in ONTIER

Spain
Expansión, the main economic newspaper in Spain, talks about the ONTIER Cup and the art exhibition hosted by our London office

On Tuesday, the newspaper Expansión published an article about culture and sport related actions carried out by big law firms. ONTIER stands out for promoting the ONTIER Cup in Oviedo and for hosting an art exhibition comprising artworks by starting artists in our London office.

These however are just two examples of ONTIER'S engagement with sports and culture. ONTIER also awards excellent law students with the Cervelló scholarship. The firm also has a runners club, promoting races among runners from our offices in Madrid, London, Seville or Oviedo and, since this year, ONTIER is also sponsoring the KCL Football Club.

ONTIER will sponsor this international tennis game, taking place at Oviedo's tennis club (RCTO) for the next five years. As explained by Eutimio Martínez, managing partner at Oviedo, the sponsorship of this game relies on ONTIER's interest on committing to this kind of activities. First of all, it's an international tennis game, it is one of the first tennis games organized in Spain and it allows future tennis stars to launch their careers.

From October on, ONTIER UK supports starting artists through an exhibition in the Ludgate Hill office. The exhibited artworks change every two months so that they can enjoy being surrounded by every kind of art style, which makes the office become a colourful, powerful place.

This activity also turns into a bonding element for the ONTIER UK team. Being able to enjoy quality artwork in the office also promotes conversation and communication, as stated by Alex Mallia, from our Administration team in ONTIER UK. 'We are excited to be supporting artists at our office. It's a great opportunity to work with the Arts and it's already having a positive impact on the space', she noted.